Last night was very frustrating. Long story short: gearbox issues are only worsening and three of the four runs were wasted by shifting from 2nd into 5th instead of 3rd. The night was extremely quiet at first. I had two runs within the first fifteen minutes, but then it started to sprinkle. The rain was so light that the road wasn’t even wet to touch, yet it closed the track for over an hour. Strangely, more competitors poured in during this time. When the track eventually reopened, I managed another two runs.

The good news is I managed a PB on the first run, despite the engine not quite being up to temp. 12.686 @ 114.88 mph was a nice improvement over the 12.844 @ 114.31 mph last time out, but there is no doubt the car is capable of more. The wider (albeit cheaper) rear tyres at 14 psi were good to launch, with 2.0xx second 60 ft times on each run. Next time I’ll try even lower pressures, as there was still wheel spin shifting into second. I will scan and post the time slips at a later date.

I could probably drive around the gearbox issues but I’ve never had these type of problems shifting in any of my other S13s. This morning I purchased some gearbox oil and friction modifier in the hope it will improve things a lot. 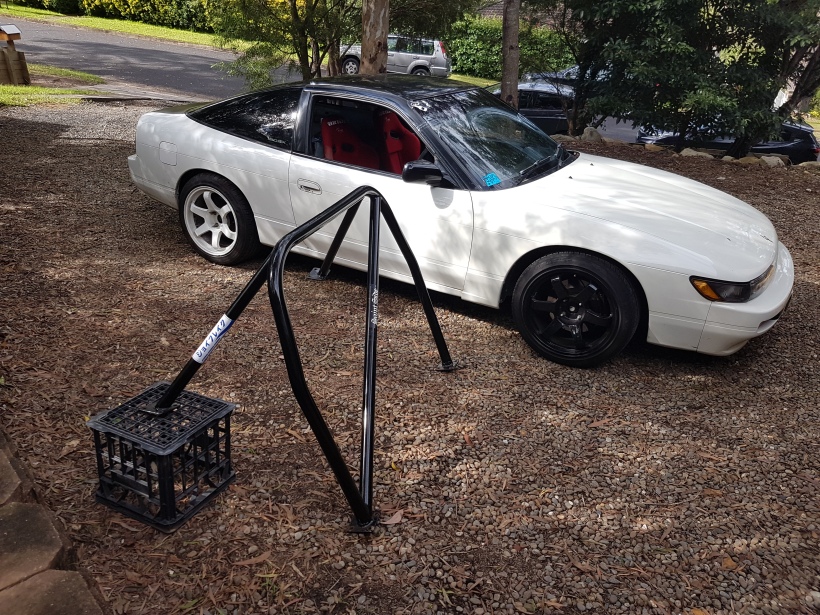 This afternoon I commenced on the roll cage installation. It seems pretty well made, with decent welds and weighing in at 18 kg. It is all one piece so I was hoping to insert it through the rear hatch, but it just won’t fit. The seats have to come out and then it goes in fairly comfortably through the passenger door.

Now the real work can begin. I used a 12 mm step drill to initially drill a single hole for each mount. This would let me put a single bolt through to keep alignment. I’d like to note that I spent $20-30 on new high tensile nuts, bolts, washers and spring washers. The old ones were toast but even if they look OK, you might as well spend a bit extra for the safety.

Some of the bolt holes are hard to get to when you drill the remaining. For these I used a flexible extension on the end of the drill. The picture below right shows the holes from underneath.

Next I cracked out the silicone sealer and coated the underside of the new holes. The plate was then put in place and a single bolt and nut inserted. Tightening this pulls the inner and outer plate closer together and makes the other bolts easier to connect. I used a spring washer and washer underneath the car to prevent them working loose.

Currently the bolts are in place for the two mounts inside the wheel well. The holes are drilled and ready for the two floor mounts. I will hopefully silicone and insert nuts and bolts to finish the install tomorrow. M10 x 30 mm bolts were perfect for the wheel well mounts, although I think I will need slightly longer bolts to reach for the underside mounts.