Unfortunately the engine in my grey 180sx expired due to a spun big end bearing. This page serves as a guide for what to expect if you are rebuilding an SR20. Obviously some of the prices will be different depending on where parts are sourced from and where the work is done, but the data still stands as a record of my experience.

After driving the car home from work for 15 mins in a very slow and subdued manner, I gave the car a few seconds of straight line boosting, after which I heard a rattle/clacking sound from the engine bay intermittently. The sounds occurred only on low load and low rpm to begin with, so I thought not much of it, and used the car over the next day to run some errands for a hour or so. The car was not down on power but the sound was getting a little more frequent. I did a compression test to try and work out what was going on, and scored an excellent ~160psi on all four cylinders.

The next day I left to go on a long journey and things got a lot worse. Grinding sounds and louder rattling started coming from the engine bay, so I limped the car to a nearby mechanic, who informed me it was a big end bearing. Although I was only a few hundred metres from home a lot of damage was done on this trip. The engine sounds like a few rocks being shaken in a tin jar, and cut out at ~60km/h several times. By the time I got home a minute or so later it was extremely noisy and would not idle. I switched the engine off and let the car rest from there.

I had the car towed down to Ricol Automotive in Peakhurst (IDA sponsors), after discussing the problem with the boys at a IDA event at Oran Park. A few days later they returned the news that not only did the bearings need replacing, but other parts of the engine needed repairing or replacement due to the fact that metallic particles from the destroyed bearing were pumped through the lubrication system. It seems that short drive home did a lot of damage. Bad news also was that the compression was now all over the place, meaning the piston rings had been damaged by the nasty oil. The entire engine needed to be chemically cleaned to remove the foreign particles, and items such as a new oil pump were required. The original crank was damaged too, and was probably best replaced. Tragically my newish HKS camshafts had also been scored, but were savable with a clean up. 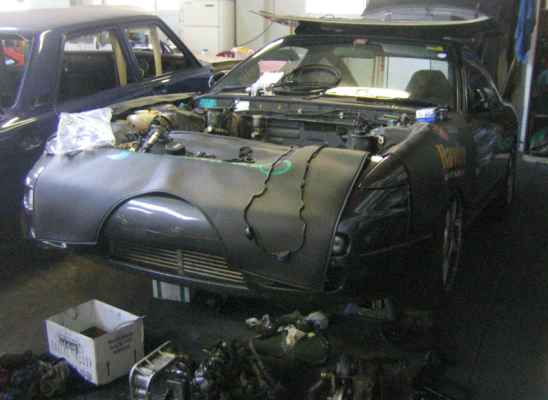 The car sitting in Ricol with the engine in pieces, not a pretty sight.

The engine laid out in pieces on the floor.

Crank scoring where the damaged bearing was located.

HKS camshafts. Notice the scoring on every lobe from bad oil particles.

Ricol said that there was a lot of thick oil buildup on the inside of the engine suggesting that poor maintenance had been undertaken in the past. I know the previous owner serviced the motor religiously but had a bearing replaced under warranty after hearing a slight knock when he first received the car. Most probable is that the car dealership did the quickest, cheapest job they could, only replacing the bearing and not bothering to clean out the oil buildup which caused the problem in the first place. Which meant a ticking time bomb that went off just after I took ownership of the car.

The actual bill from Ricol, only the number plates removed from top right.

So in addition to these parts the following were required:

Obviously these need replacing as they broke in the first place. I sourced them at trade price through friend John from Repco, retail was $150. Repco can also provide oversize bearings if it is chosen to machine the crank.

It is a good idea to change these even if a compression test returns excellent results, as the motor will make more power and be more efficient (like new again in combustion chamber sealing). Sourced by Ricol, exact price when job is finished.

Highly recommended for replacement since the nasty oil was pumped through it. Sourced by Ricol as a new part from Japan, mailing time 2 weeks. Alternatively, a good second hand unit was found by Ricol for $150.

Needed due to scoring where bearing was destroyed. Alternative is to machine crank smaller and fit over size bearings. Supplied by friend Greg from an S15 motor with only ~5000 kms on the clock.

A good time to upgrade while everything is apart. Note that a new one is needed regardless of the previous condition. Supplied new by Greg again, who tells that apparently a Nismo rebuild kit with the said gasket and a few others can be had for ~$400 if you shop around.

Obviously there is going to be a great deal of labor is any case from the process of pulling the engine out and down, as well as putting everything else back together. The following is specific to my case but may still apply to others.

Extra Things in My Job

A few small jobs were untaken at my request:

So I am left with a basically brand new engine with factory specs. I’d say the compression is up a little bit from the machining of the head block with still factory thickness head gasket, so probably why it feels so damn responsive. Expensive yes compared to the cost of installing another second hand engine but at least now I know I have a sound package ready for track time.

Everything back except for strut brace which needs to be picked up from a friend’s place.

How a manifold looks after sitting doing nothing for months. 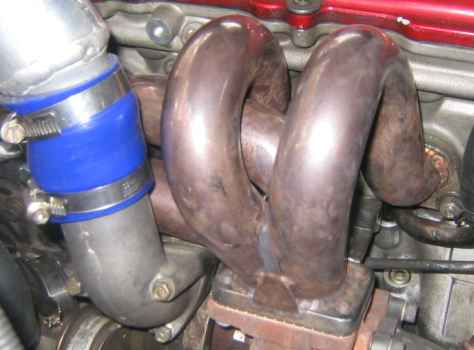 Previously a bigger gap has existing between the two dynos, but with these tests they are at the moment at least very similar. It is very possible that something has been altered at Unigroup to make their dyno read a little lower than before, because another car made 13 rwkw less than his previous visit with no changes at all (except the rebuild).

The engine should make more power after a little while when it has loosened up. Now it is classed as a ‘tight’ motor, being freshly rebuilt. Despite all of this, the car to me feels faster than ever before, so who knows what is really going on.

One strange thing is the shape of the power curves differ quite a bit between the two dynos. The Ricol graph climbs in power steadily before dropping just before the end of the run, where as the Unigroup graph shows an early peak and drop off of power. On the road the response feels more like the Ricol graph, with power staying strong the whole way. 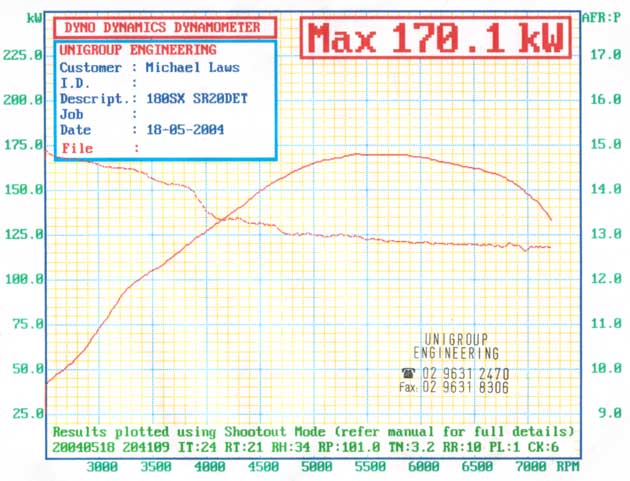