Apparently SR20s can have a catastrophic failure when hitting the rev limiter in that a rocker arm can snap, sending the valves into the top of the pistons. Rocker arm stoppers are a very simple part that bolt above the cams and rocker arms to physically stop them from dislodging in the event of a failure. GKTech provide an affordable and locally made kit that fits S13-S15 SR20DE(T)s.

Fitment of the stoppers is quite simple, but the hidden difficulty comes from some grinding of the inner cam cover and the very important clean up. Failure to cleanup will allow fine metal particles through the oil system and destroy the engine. You will need a small torque wrench capable of quite low settings. If you simply tighten the bolts by feel you will very likely snap them off and leave your head useless until repair. This is a straightforward job but one that requires good preparation and a lot of care. You have been warned.

The coils will need to be unbolted and draped over the base of the windscreen. There are three oil breather hoses to remove with pliers and/or a screwdriver. After this the rocker cover is ready to remove. The FSM provides a diagram on how you should loosen the bolts:

Each washer and bolt is identical except the very centre which is longer (15). Keep them somewhere safe.

From this point onward you need to be very careful about debris blowing into the open engine and contaminating the oil.

Once again a certain order must be followed to avoid damage. I recommend doing one side at a time, starting with the inlet side.

Here the cam bracket bolts have been removed and have been laid out in order on clean cardboard. The longer ones go on the outside of the engine. The rocker stopper for the inlet side is resting in place. They only fit one way but to make it easier, it is the one without the notches on the top surface.

The oil squirter for the cam is raised at the rear by the rocker stopper. It therefore needs to be raised to match where it bolts to two of the inner cam bracket bolts. A small piece comes in the kit for this purpose and should be fitted as pictured. 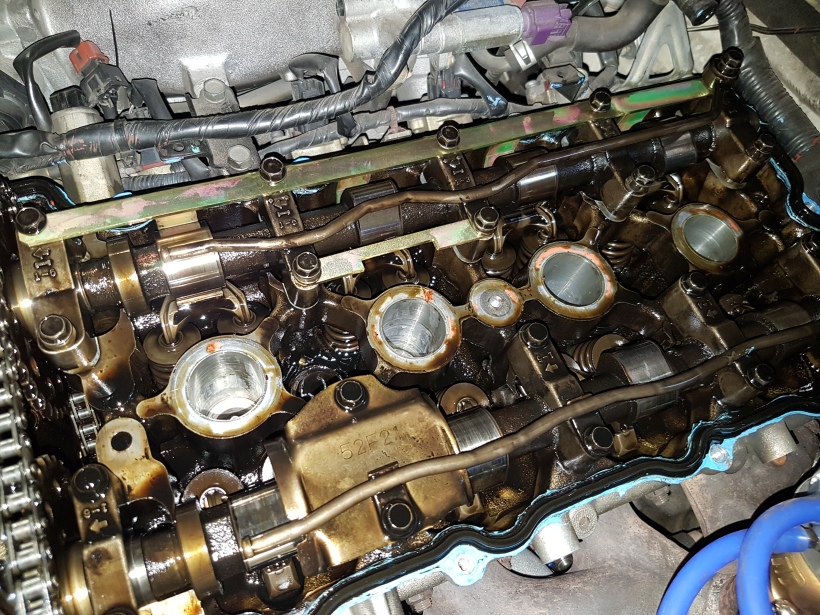 Here comes the precision. The FSM instructs the bolts to be tightened not only in a specific order but also in three stages:

If you are familiar with using a larger torque wrench with high loads, you will will be used to pulling hard and waiting for the clunk. A small torque wrench is lot more subtle, especially on lowest loads. The sound is quiet and easy to miss if you are not careful. Turning it slowly as the bolt gets tighter will ensure the correct result. It’s more of a flex of the neck than a loud clunk. The following video shows this repeatedly at the end. Don’t be confused by the click of the ratchet in the lead up.

Repeating on the Exhaust Side

The removal procedure is the same, except now you have an oil baffle that must be ground before the stopper can fit in place. The following picture depicts the problem. The rounded edge of the baffle fouls on the stopper and needs to be ground so the end is flat. 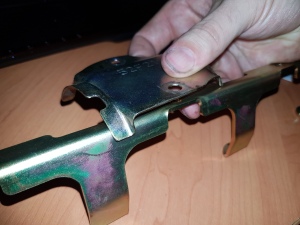 After a cut, Dremel and thorough clean, the part was ready to fit. Various online guides picture the stopper either on top of the baffle or underneath it. Either way, either it or the baffle with be slightly slanted from the mismatch in mounting height. I found a thick washer close to the stopper thickness and placed it under the rear mounting hole of the baffle, mounting the baffle on top of it and the stoppers. This ensures everything sits as flat as possible.

The cam bracket bolts can be carefully torqued in order in three phases like on the inlet side. Note the notches on the exhaust side stopper to allow the cam squirters free access to the cam lobes. It should now look like the image below. This concludes the easy part.

Grinding the Inside of the Rocker Cover

This is hard because you can’t really see where the cover hits, so have to grind using guides such as this as your only reference. The internet told me there was two places that needed grinding. The entire cover was degreased and wiped clean, then I attempted to mask up the internal oil baffles with tape before cutting. This should save on some cleaning later. 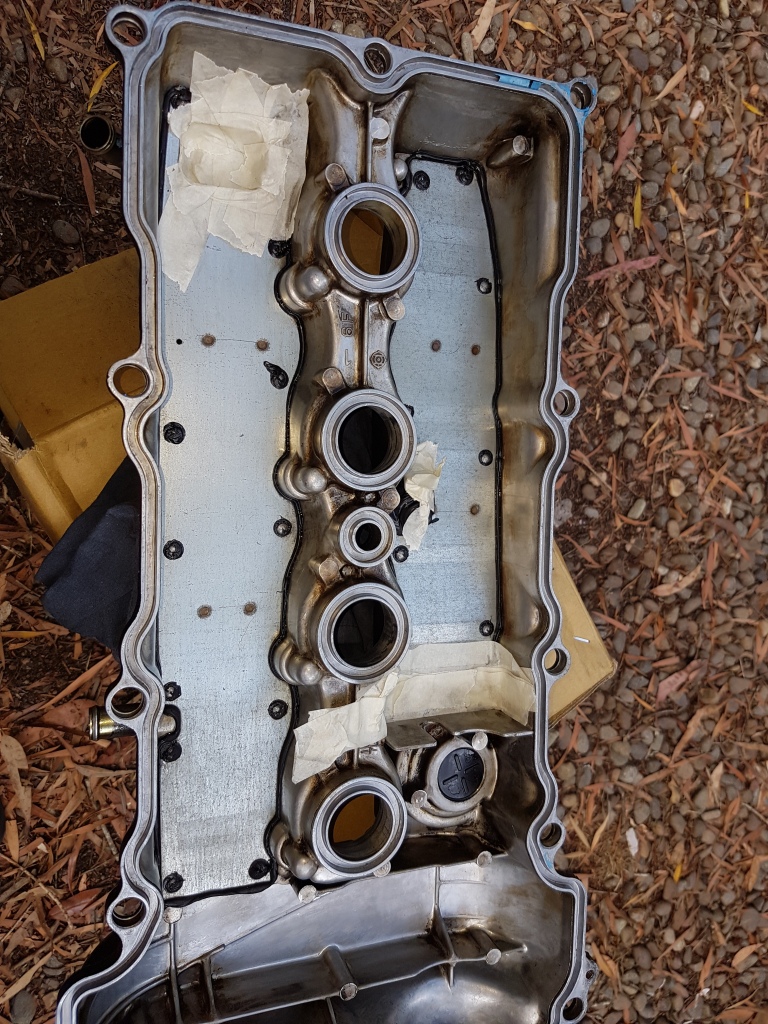 The two sections requiring attention are near the two taped areas in the ‘before’ picture above. The easiest is near oil breather in the top left of the image. The higher bolt that mounts the inlet oil squirter is meant to foul the rocker cover, so a small section must be ground as follows ‘after’: 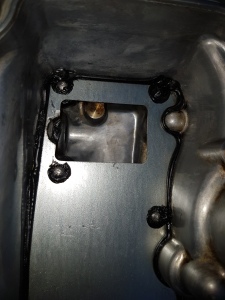 The harder part is the webbing near the underside of the oil filler. A large piece must be removed from here as the rocker arm stoppers will clash. As a guide, you are going down as almost as far as the arch on the right section of the webbing (as pictured below), leaving about 5-10 mm of the original webbing to the right, and only about 2 mm maximum on the left (pictured below ‘after’). The first time I did this I didn’t remove enough and had to do it again, which means twice the cleaning. I used a grinder to cut vertically to the required depth, then a Dremel with a cutting disc for most of the horizontal cut. I could get it the whole way through so a hit with a hammer snapped off the offending chunk. A Dremel with grinding bit was used to clean up the edge.

At this stage you have a rocker cover full of aluminium particles, just waiting to be caught in oil, drained to the sump and pumped through the engine, destroying it. Clean up in the rocker cover is therefore vital. I flooded the lot with degreaser and swooshed around before pouring out the liquid with muck. I then wiped every surface with a clean cloth, wiping up the particles and frequently switching to new, clean parts of the cloth. Finally, I used compressed air to try and blast away the particles from some of the smaller cavities. The reality is this will need to be repeated several times to do a good job. The black silicone already in the cover will attract particles, so particular care is needed. Be very careful to repeatedly flood, drain and wipe the baffled large cavities. They might look clean at first but be hiding debris which will eventually drain back to the sump.

You can reuse the rubber gaskets but fresh sealant is still required. Make sure it doesn’t leak but also don’t be too excessive and wipe away the bits that inevitably squeeze out as pressure is later applied.

The final step is to replace the rocker cover bolts and washers. There is another unique sequence to do this correctly: 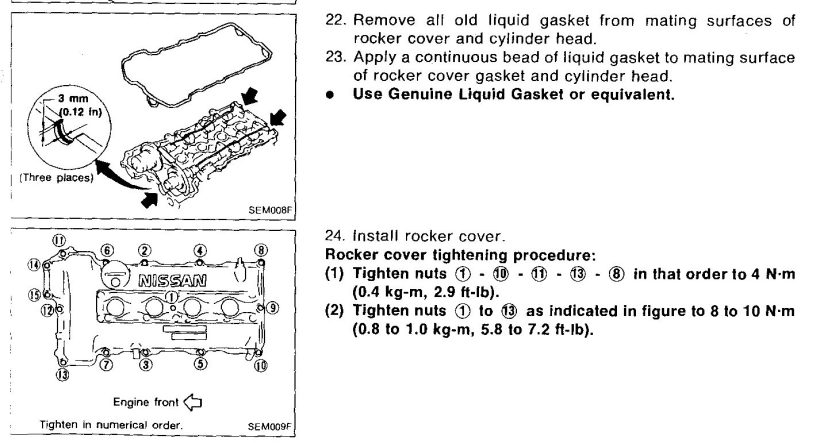 Reattach coils and oil breathers. Hopefully everything fires up and runs without any strange noises. If it does you’ve just added some insurance should a rocker arm ever snap.