A wastegate is a valve in a turbo system that opens to regulate exhaust gas through the turbine wheel and therefore boost pressure. Once the turbo is making the target boost pressure, the wastegate opens to divert some exhaust flow around the turbo. Without a wastegate, the turbo would continue to accelerate and generate higher and higher boost, until something breaks. This could be the turbo from excessive rpm, or the engine from huge boost and the associated detonation.

Factory turbochargers generally come with internal wastegates, where the wastegate valve is located within the exhaust housing of the turbo. This makes the entire system more compact and therefore cheaper to manufacture and easier to package in the engine bay. An actuator is attached to the wastegate, which flips it open or closed based on the boost pressure in the inlet system. A spring in the actuator holds the wastegate shut until the boost pressure overcomes the spring. Therefore the tension of the spring is responsible for the boost pressure a turbo will produce. Exhaust flow is limited by the size of the gate and flow may be compromised by the exhaust gases from the wastegate and the turbo outlet having to mix in the dump pipe. Great power can be made on internally gated setups but ultimately they are compromised.

The following diagram depicts a wastegate opening to allow some exhaust gas to bypass the exhaust turbine:

An external wastegate is located separate to the turbocharger. The exhaust manifold needs to have provision for the turbo to be mounted, as well as the wastegate. The inside of the wastegate is like the actuator attached to an internal gate, with a spring that holds the valve shut which is then overcome by boost pressure to allow the valve to open. External wastegates are generally larger and will flow more exhaust gas without restriction. They are the ideal choice for big power applications.

The following image shows an aftermarket exhaust manifold from an RB26DETT engine with a flange for the turbo (centre) and mount for the external wastegate (top left):

Adding an External Wastegate to an Internally Wastegated System

I purchased my Sileighty with an external wastegate, despite it being fitted with a standard turbo. To achieve this, several things need to be altered. The image below shows these, but with the external wastegate and some inlet piping removed.

The advantage of this type of setup is the reduced restriction in the exhaust from the larger wastegate valve, the merging of the wastegate exhaust near the cat instead of just behind the turbo for reduced turbulence, and ease of access to the turbo due to the absent actuator. This setup does prevent me from installing a bolt on kit like I did with the HKS 2510 on the grey 180sx. A turbo like this can still be installed but the internal wastegate would need to be fixed shut, which is an undesirable option for a shiny new Japanese turbo.

Upon inspection of my external wastegate, which looks to be a cheap eBay no name item, it was discovered that the quality was less than desirable. The valve inside the unit was very wobbly, and the vacuum port was blowing hot exhaust at idle, indicating an internal leak. There was also an exhaust leak from the mess wedged between the manifold and wastegate flanges. 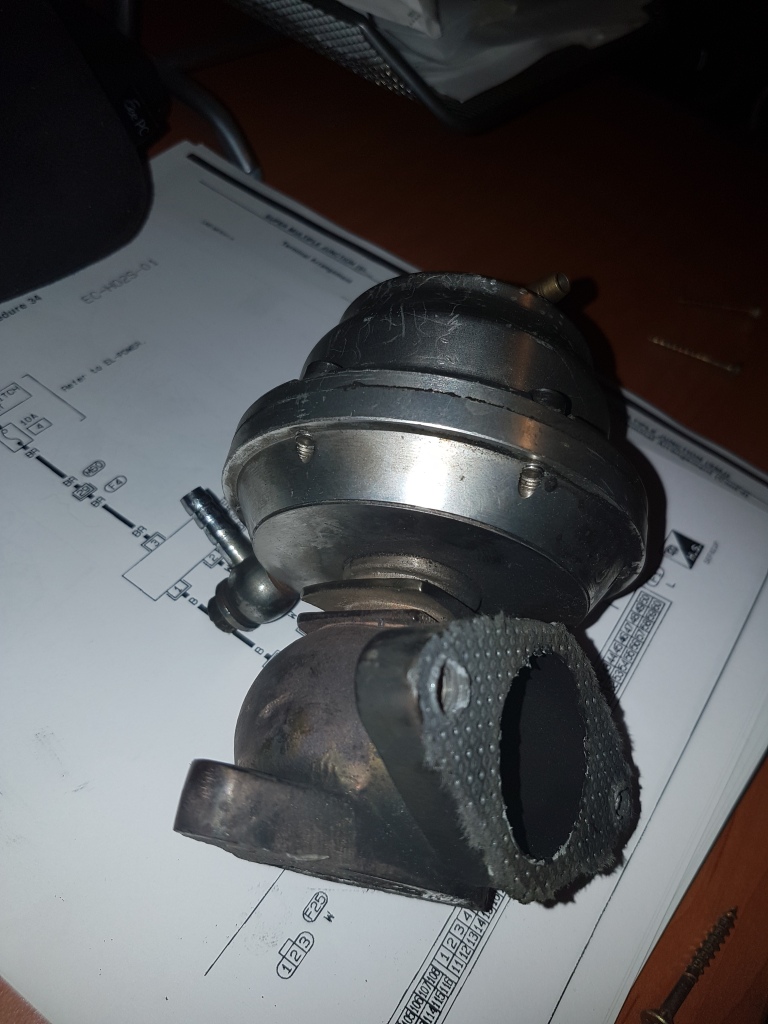 The Solution: A Replacement Unit

I settled on a Turbosmart Ultragate38 because it was cheap ($325), easily available online from GCG Turbo, and appearing to be of good quality. I assumed that since it was replacing a 38mm unit, it would bolt right up. Once it arrived, I was pleased to discover it ticked all of these boxes.

Below is an image of the old and new wastegates. The dodgy gasket shows a black portion where exhaust was leaking. The turbosmart unit is much physically smaller despite having the same 38mm port. There is absolutely no play in the valve which is very comforting.

This wastegate comes with a valve seat, here pictured above in isolation and below in place against the internal valve. This jams up against the valve and aims to prevent leakage until the valve is meant to be open at max boost. The old unit was sorely lacking this.

I consulted the Turbosmart manual to double check for anything out of the ordinary.

The first step was to screw in the vacuum hose ports, securing them with Loctite. There are four ports available and only two required, so two blanking grub screws must also be inserted.

The cheap and nasty gasket remains on the old manifold and dump pipe flanges must be scraped off. Put a rag in the manifold orifice to prevent pieces of old gasket falling in and the later going through the turbine wheel.

After this, the new wastegate can be bolted into place, with the valve seat and new gaskets in place. The new gaskets are stainless steel, with a raised section that crushes to form a nice seal. These type of gaskets are meant to be replaced every time the wastegate comes off. Connect the vacuum hose to the bottom port of the wastegate and double check the engine bay for tools before starting the car.