Arghhh! What a day. I diagnosed the problem very early on as a ruptured turbo coolant hose. It had become pinned between the compressor housing and the engine mount and had slowly wore away. It turned out to be insulated rubber hose instead of stainless steel braided hose. I had spare braided water lines that came with the turbo so the job should have been straight forward to replace the hose.

For most of the day it really was. I had the turbo off in a couple of hours. The removable external wastegate pipe was fantastic in the way it cleared up space. I removed the turbo with the manifold and dump pipe still attached which is my favourite method. Another half an hour and I had the new coolant line plumbed and routed. 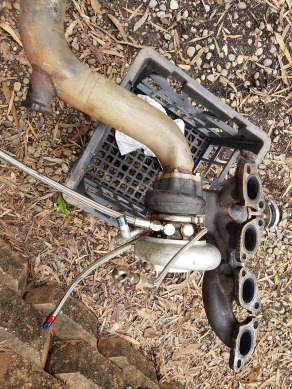 In only one hour I had everything back on and started up the engine. Oil started squiring out everywhere…

When previously attaching the turbo oil feed to the block, I dropped one of the copper washers from the banjo bolt. I had a container of new spares so used one of those, but for some reason it wouldn’t seal. I pulled off the banjo, swapped the washers around and now the leak moved to the outside of the banjo, following the replacement washer. Again I pulled it off, found the original washer resting on the engine cross member and started to reassemble. I had a lot of trouble getting the thread to start. A few more attempts and the bore in the block was officially threaded.

I cut a small square of cloth and used tweezers to jam it in the bore. After this I carefully drilled and tapped the thread, using cotton buds and rags to clean debris regularly. There was a lot of stuffing around trying to get the tools to fit in the available space. The heli-coil looked too long so I used side cutters to trim off a few rings. It went in very easily and smoothly with the supplied tool. Snapping off the tang was difficult because the protective cloth was still at the back of the bore and stopped it from moving. I removed the cloth with tweezers and then wiggled the tang until it snapped.

Next up I started the engine with the oil hose disconnected to blast out any possible remaining debris. A bit messy but worthwhile. With a pounding heart, I reinserted the banjo bolt and it screwed in smoothly, tensioning at the end without the dreaded feel of a damaged thread. The engine started: no leak! Even better, it was still good after a test drive. Crisis averted and the new thread should be stronger than ever in theory.

The product I used from Bunnings is depicted below. It would be as easy as they illustrate if it weren’t for a cramped engine bay and the kit going into an oil gallery that absolutely had to stay clean.

Tomorrow afternoon the plan is to get the half cage bolted in. I’m planning on drag racing this Wednesday night.