I’m home and content with my day. The car ended up making 208 rwkw, which it a fraction lower than the grey 180sx but not directly comparable since it was on a different dyno (both workshop and brand). According to the internet, the dyno at MRC doesn’t read as high as some others. All that matters at the end of the day is if I’m happy with how the car drives, and at this stage I am.

Mark at MRC Dyno was patient, humble and friendly. He didn’t budge on his price and loaded up my car straight away, knowing that I would be hanging around a long way from home. He asked me about the mods of the car and my aims and what image and tuning was already in place.

He first began by getting the K constant and TIM correct. As the Nistune documentation suggests, he held the car at about 3,000 rpm on light load and played with K until the short term trim was zero or within 1%. After this, he started holding the car at higher loads on the dyno to assess how the open loop mixtures compared to those predicted by Nistune. He soon had the the TIM set so that the actual AFR was within 0.3/0.4 of the Nistune numbers. Mark was also able to tweak the fuelling map so that the ECU no longer held closed loop in 4th and 5th gears at low boost.

The first power run took place on minimum wastegate spring boost. The mixtures were instantly on target throughout the rev range. The external wastegate was struggling to pass enough gas, with boost creeping up to 17 psi at high rpm. At this point he started to gradually increase boost. At 18.5 psi, the intercooler pipe on the hot side blew off. This was the one that I had to cut to make fit. As a result it was missing a bead and vulnerable. I asked Mark if they had a bead roller, to which he replied that they did and I could roll a bead on the pipes if I wanted to pull them off. Below is the before and after. This should never happen again unless a hose camp were to fail. 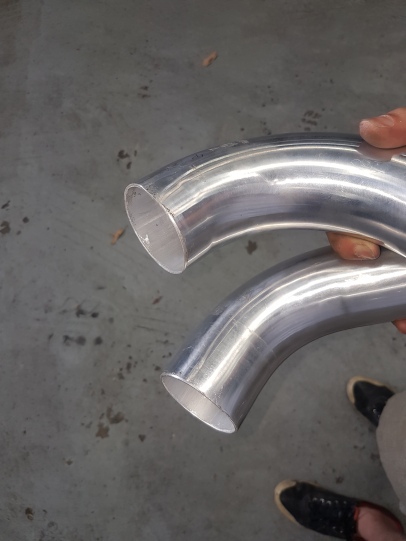 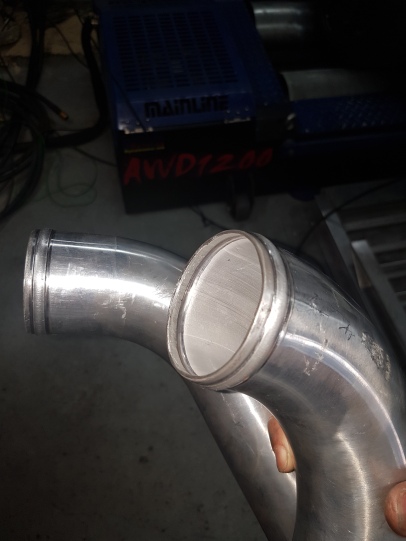 After a short break, Mark continued the tune. He eliminated an over enrichment on application of throttle that was seeing AFRs of 9/10:1. He also fixed the idle by making it richer and back at the 850 rpm factory target. He checked the base timing as well to be thorough. Some more power runs took place at higher boost, Mark stopping at 19 psi because of the track work I intended to do. He pulled a lot of timing out around peak torque to stave off potential detonation on the track and left the mixtures a fraction on the rich side. I get the impression this is a conservative and very safe tune.

On the road, the car didn’t feel a huge amount quicker. It doesn’t hit with the same force as the HKS 2510 did on the grey 180sx. It still surges onto boost, but the power really builds up until 7,000 rpm. The lack of mid range is due to the missing VTC. I am likely to buy a new VTC unit and refit it at some stage. There was a lot of discussion over the cams in the engine. They made good power up top compared to an S13 SR20DET with stock cams. This might just be due to the standard VTC cam in the upper rpm optimised position.

The car is a lot more driveable without the rich spot then lean mixture as it starts to boost. Lag is reduced and the car is driving very well. I expect to take a big chunk off my ET at the drag strip next time out, assuming I can launch the car. Increased mph will be indicative of the new power. I feel the tune is safe enough that I can use the electronic boost controller to bring the turbo on quicker, even it causes a boost spike. I will experiment with this in the coming days and likely bolster the mid range.

On way home I had the registration safety check completed on the car and picked up the engine bay plastic enclosure for the multi-gauge system from Jaycar. All I need to finish that system are my waterproof connectors which will arrive any day. The aim is to drill holes and epoxy one half of the plug in the plastic enclosure. The micro controller wires will then be terminate to the inside of the plug, and the sensor wires in the engine bay crimped into the other half of the plug. The sensors then plug firmly into the enclosure. This should be waterproof, strain proof and reliable. Everything is being documented and will appear on a new page in the near future.

I need to get a new helmet and then I’m super keen to hit the track again.