Dyno run has been and gone. Unigroup were just as friendly and helpful as I remember. 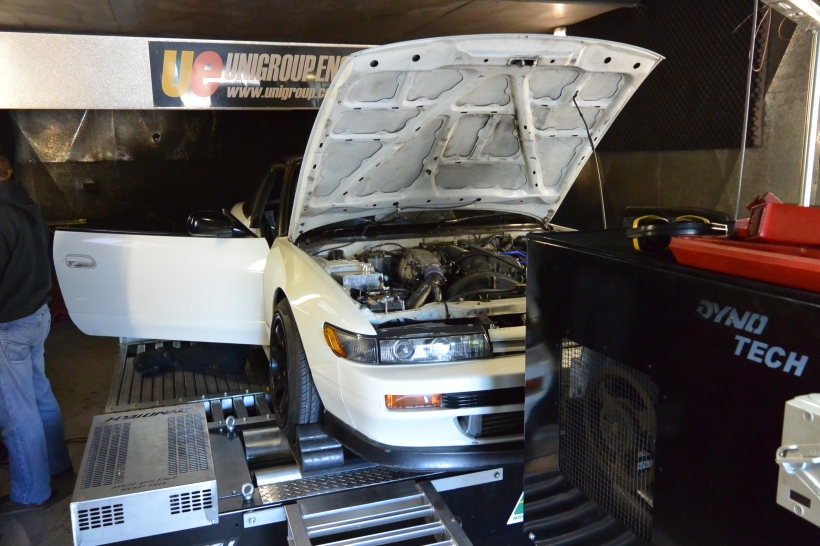 I took down my laptop and consult port cable to watch the ECU function in real time using Nistune. The alarm installer had pushed the consult plug way out of the way, to the point where I thought it had been removed. Paul from Unigroup fished around the fuse box and found it. He connected my laptop and away we went.

It was fascinating to watch the fuel and timing maps being traced in real time. He immediately commented on the roughness of the tune, especially in the way the constants had been tweaked to accommodate the changes in air flow meter and injectors. He added some fuel to the transition onto boost and then performed the first power run. The car made 169.6 rwkw, well short of the 215 rwkw claimed on the dyno graph that came with the car. Paul advanced the ignition timing by 2 degrees, which netted a 8 rwkw gain. At that point the motor started to detonate with further power runs not gaining any increase in power. Paul cited some sort of heat soak. The timing was returned to the original setting and the job was done.

A lot of fruitful conversation took place around the reasons for the car under performing. Roland detected an exhaust leak around the turbo, however this was not necessarily to blame. They gave me some T28 manifold to turbo and turbo to dump gaskets to fix the problem.

Paul seems adamant there is an exhaust restriction, in the form of a blocked cat or similar. Given the size of the FMIC, heat soak shouldn’t have been a factor in the intake system. Therefore it must be coming from the exhaust side. I will be checking for blockages today with the hope of finding something obvious and a bunch of power being restored. Paul also pointed out that the cannon muffler was only 2 inches or so through the centre, which wouldn’t be helping matters much. I am planning to have the rear section of the piping replaced (from near the diff) with 3.5 inch pipe and a Varex muffler. This will allow the car to sound very quiet if the need arises and still have great power at the track.

Paul also thinks the car might have aftermarket cams, judging by the the lumpy idle. This would account for the lack of response down low. If the car was once making 215 rwkw with the current turbo, then having cams makes this more realistic. It may be hard to verify the cams, but I am planning to pull the rocker cover off and fit rocker arm stoppers at some stage.

Paul thinks the injectors are larger than stock but possibly only high flowed. He recommends changing to an off the shelf larger item. 555 cc if available or 740 cc if not. This should help the running by atomising the fuel mixture correctly.

An S14 or S15 T28 should be able to make over 200 rwkw with my current supporting mods. 170 rwkw is definitely too low. My grey 180 exceeded this years ago with a standard afm and T25G turbo. The best case scenario is I find something obviously wrong with the exhaust and the car comes to life. If the exhaust is fine, then it’s time for head scratching.

My friend Dave (driftdave) accompanied me to Unigroup. He has recently purchased back his 20B Cosmo which he owned 5-10 years ago. It’s mechanically stock and put out a respectable 161.7 rwkw. 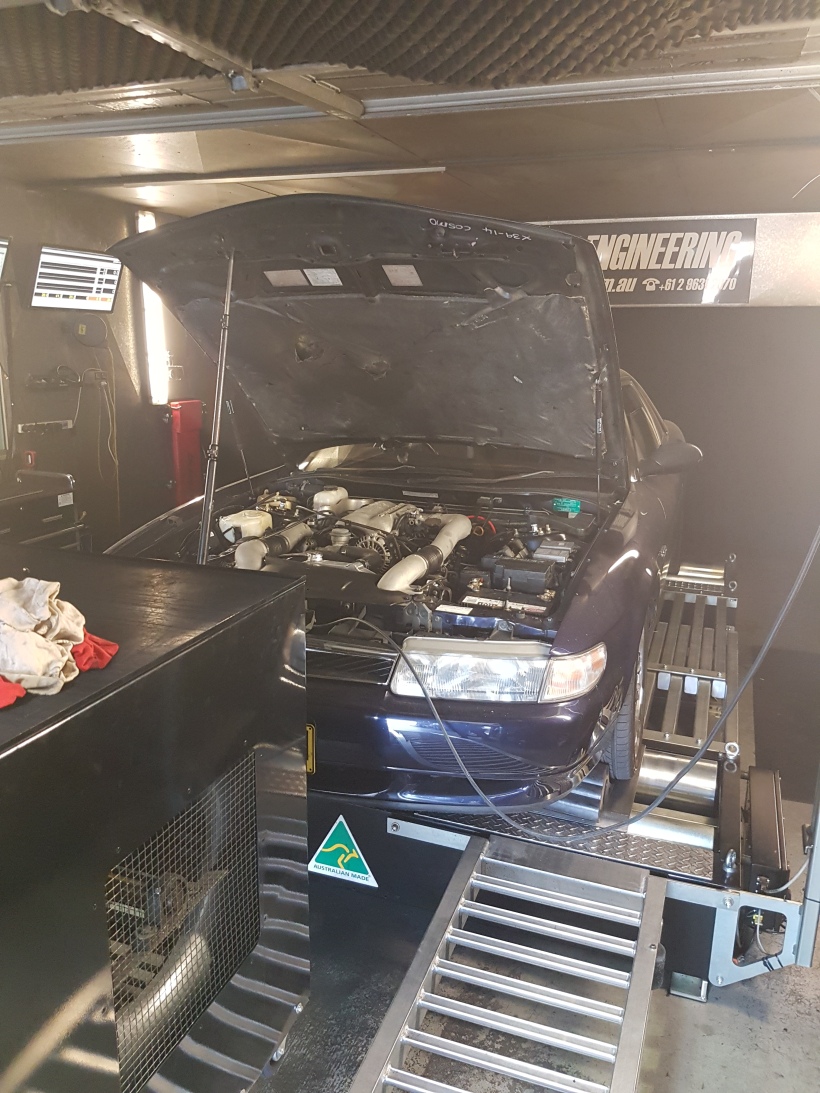 The power and boost curves are all over the place. This is partly to do with the transition between the two turbos not quite functioning properly. He also has a problematic leak in the exhaust manifold. The car will make a lot more power with basic mods like an exhaust and larger intercooler. The trouble is the factory ECU tries to fight the changes, yet must be retained to run the dash, transmission, air con, etc. He will need to splice in an aftermarket computer just to run the fuel and timing. After this the car will pump out big numbers with the standard twins. Exciting times ahead.